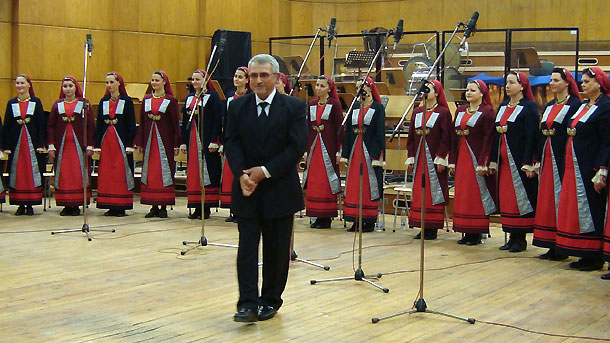 Georgi Genov began his professional career as a teacher and conductor of the Philip Koutev National School for Folk Arts (NSFA) choir in the town of Kotel, where he worked during the period 1974 to 1980.

Later he was conductor of the Folk choir with the Committee for Television and Radio (until the end of 1989) and they gave concerts and made recordings for the Bulgarian National Radio (BNR).

Some of these recordings were included in an album of the series of three "The Mystery of the Bulgarian Voices" produced by Marcel Celier, which won the Grammy award.

In 1987 the Jaro company recorded a concert by the Folk choir in Germany and the LP released as "Cathedral concert" became very popular in Europe and the United States and was nominated for the Grammy award in 1989.

In 1995 Georgi Genov accepted the invitation to become conductor of the choir of the Philip Koutev National Folk Ensemble and within a very brief period of time he restored its brilliance and high professional level by both specific work with the choir and by enriching its repertoire, with his own songs and arrangements included.